Chapter 5 Inference for counts and proportions

One of the most common forms of quantitative data in natural resources are counts and proportions. This might include whether or not a species is present or absent in an area, whether a plant survived or died after an experimental treatment, or whether a rain event led to flood conditions or not.

In Chapter 3 we learned about the Bernoulli and binomial distributions, two discrete distributions that are common across natural resources. Counts of events and distributions can be modeled with the binomial distribution, so we will continue to use them in hypothesis tests with data collected as counts and proportions. What will make our jobs easier is to apply a normal approximation to make inferences about the proportion of successes in a population. When working with counts and proportions, it is critical to use the correct methods and analyses in R to make the appropriate inference on the population of interest.

5.2 The normal approximation for a binomial distribution

When the same chance process is repeated several times, we are often interested in whether a particular outcome happens on each repetition. In some cases, the number of repeated trials is fixed in advance and we are interested in the number of times a particular event (or a “success”) occurs. Recall from Chapter 3 that a binomial distribution is a series of Bernoulli trials n with probability of success p. Hence, the mean and variance of the binomial distribution is np and np(1-p), respectively.

Listed below are the four conditions of a binomial distribution. Moore et al. (2017) propose to think of BINS as a reminder of these conditions:

As an example, consider that you are tasked with inspecting company facilities that store hazardous waste as a part of their operations. The probability of issuing a violation to the company for not following hazardous waste storage regulations is p = 0.24. We can confirm the data are binomial in their design: each facility is issued a violation or not (binary), inspections do not rely on the outcome of other inspections (independent), the number of inspections is fixed (as seen in the example below), and the probability of “success” is the same (e.g., the 24% chance a company is issued a violation).

Imagine you inspect 8, 20, and 80 facilities that result in the following distributions: 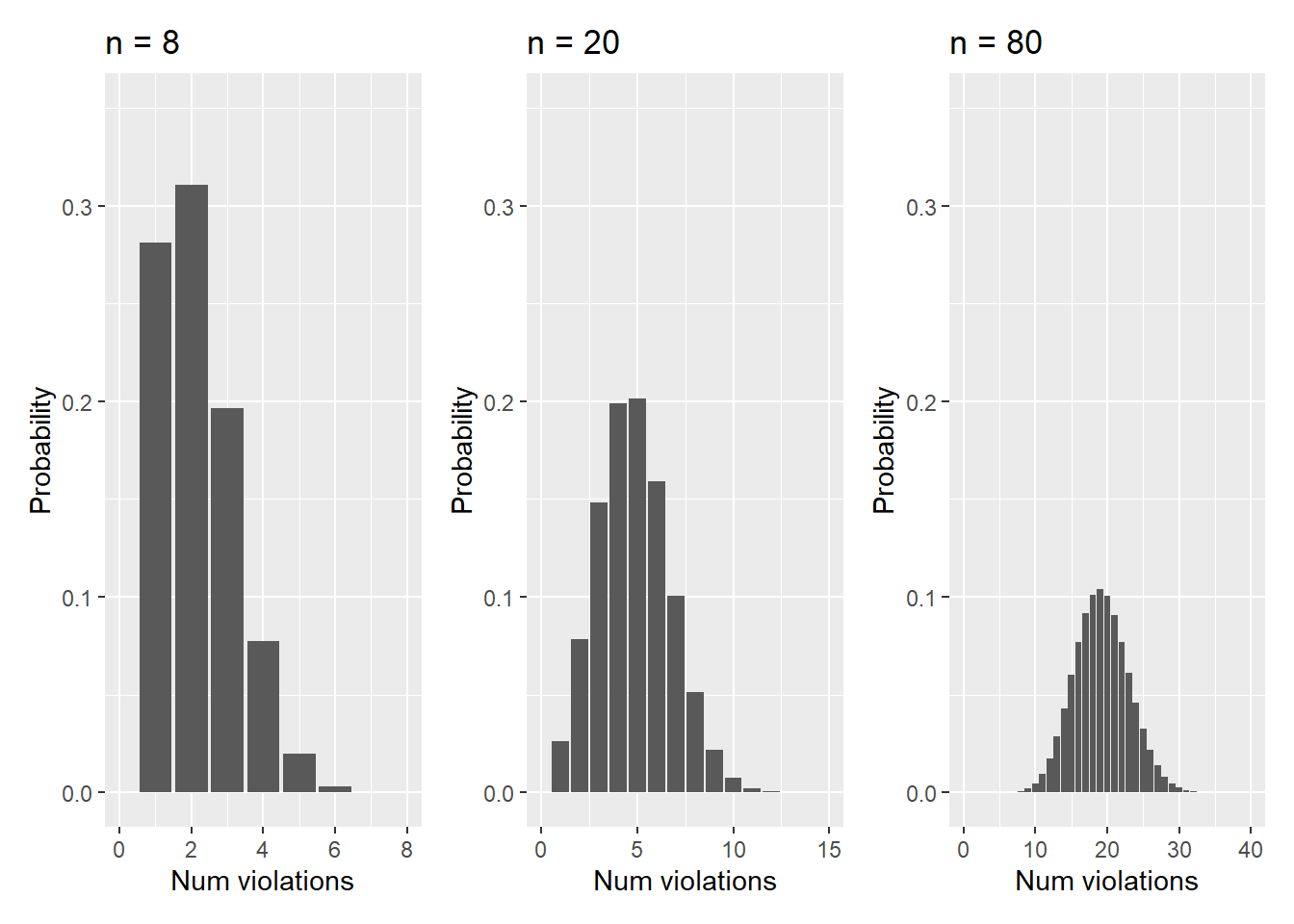 5.2 The code below uses ggplot() to produce a plot of the number of hazardous waste violations when \(n = 80\) and \(p = 0.24\). Change the arguments in the code to produce two plots showing the distribution of survival of 10 and 90 tree seedlings, each with a known survival rate of 85% after the first growing season. In particular, modify the scale_x_continuous() and scale_y_continuous() arguments to “zoom in” on the distribution.

Since we’re interested in the population parameter \(p\), we can replace \(p\) with \(\hat{p}\) to find the standard error of the sample proportion:

For sample proportions, we use the z-distribution for making inference about population parameters:

FIGURE 5.2: The sampling distribution of a sample proportion.

The null hypothesis for a one=sample proportion test can be written as \(H_0: p=p_0\), where \(p_0\) is a proportion we’re testing against. The following alternative hypotheses can be specified in a one-sample test for a proportion:

Using the z-distribution, we calculate a statistic for this hypothesis test as:

In R, two functions perform one-sample hypothesis tests for proportions. The prop.test() function applies the normal approximation to the binomial distribution and should be used when those conditions are met. The binom.test() is designed for smaller samples and should be used when the normal approximation conditions are not met.

For example, consider an organization that wants to make the claim that the majority of farmers (>50% of them) support limiting their use of nitrogen in their practices. While adding nitrogen in the form of fertilizer can improve the growth of crops, it can also run off into unintended water bodies. A polling company surveyed 30 farmers and their results indicated 18 of them supported limiting their use of nitrogen. 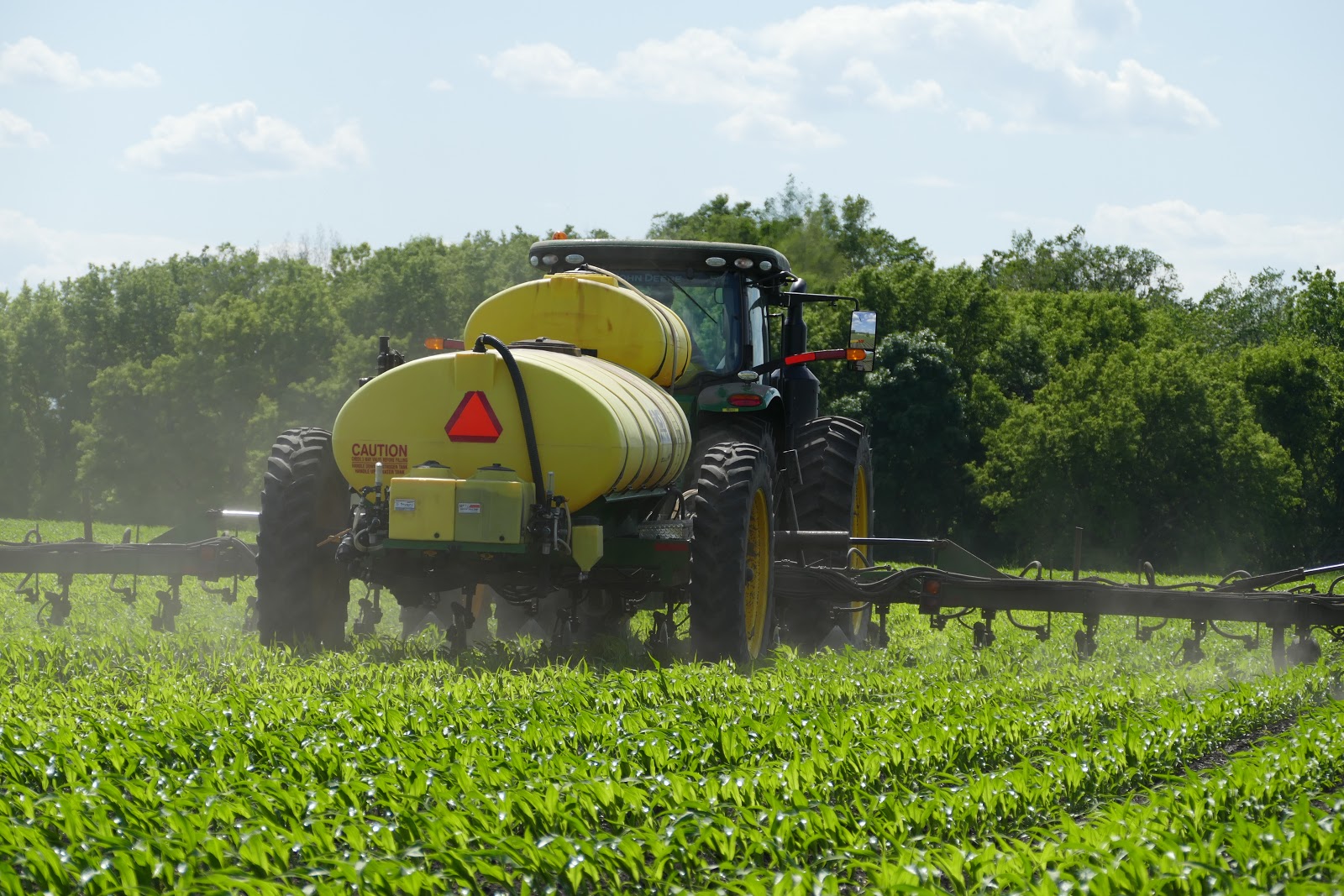 Results indicate a p-value of 0.1807, indicating the survey has little evidence to support the statement that the majority of farmers support limits of nitrogen use. Thus, we accept the null hypothesis. The output also provides a chi-squared value of 0.83333. For comparison, we can also input the same statistics using the binom.test() function:

Note the p-values and lower bound for the confidence interval are slightly different in both functions.

5.3 Perform the following hypothesis tests for proportions at a level of significance \(\alpha=0.05\) using the prop.test() function and the given parameters. State your conclusions in a sentence or two.

5.4 The Random Geographic Coordinates web page (https://www.random.org/geographic-coordinates/) uses randomness to select a set of geographic coordinates at any location on Earth. Use the website to generate a random coordinate and record whether it falls on land or water. Repeat this so that you have 20 random locations and whether they are on land or water.

Two-sample hypothesis tests for proportions examine \(p_1\) and \(p_2\), two population parameters representing different groups. The difference between the two proportions is the value that is examined in these hypothesis tests. When data are sampled randomly from two groups, we can approximate the difference \(p_1-p_2\) with \(\hat{p}_1-\hat{p}_2\), each of which may have different sample sizes \(n_1\) and \(n_2\).

The z-distribution can similarly be used for making inference about the difference in sample statistics \(\hat{p}_1-\hat{p}_2\). The sample standard deviation of can be estimated by:

We need a way to estimate a combined or “pooled” proportion p, so we can combine the data from the two samples by dividing the number of successes in both samples by the total number collected by both samples and call it \(\hat{p}\).

The null hypothesis for a two-sample test for proportions can be written as \(H_0: p_1=p_2\). The z-statistic for this hypothesis test is:

The following alternative hypotheses can be specified in two-sample tests for proportions:

To carry out this two-sided hypothesis test, we enter both of the vectors that contain the data as the first two arguments:

Results indicate a p-value of 0.1466, indicating no difference between counties in farmer support for limiting nitrogen use. So, we accept the null hypothesis. Note that the 90% confidence interval provides upper and lower bounds around the mean difference between both proportions (0.1917).

When two samples contain either a success or failure, we can represent this in the form of a 2x2 table. The matrix() function allows us to view the data in a compact format. The column and row name labels can be renamed with colnames() and rownames(), respectively:

For small samples and low numbers of successes (typically fewer than five), the fisher.test() function is appropriate for comparing two sample proportions. This function also requires the data to be in a matrix format:

5.5 Perform the following two-sample hypothesis tests for proportions at a level of significance \(\alpha=0.05\) using the prop.test() or chisq.test() functions and the given parameters. State your conclusions in a sentence or two.

5.6 The air quality data set is a built-in data set in R that provides daily air quality measurements collected in New York City from May to September 1973.

Run the code below to read in the air quality data set. We’ll name the data set air using the tibble() function:

Two variables in air that we will use are:

Write R code to find the number of days when the ozone level was unhealthy for sensitive groups or greater, defined as an ozone measurement greater than or equal to 101. Then, perform a two-sample test of proportions that determines if the proportion of unhealthy air quality days was different between the spring (months of May and June) and summer (months of July, August, and September). Perform the tests at a level of significance \(\alpha=0.05\). NOTE: Do not include days with an NA for ozone measurement.

We’ll return to these concepts in Chapter 6 when we discuss chi-squared tests more in depth. There, you might imagine that we have more rows and columns, for example, if we asked farmers from three counties their opinion about nitrogen use and they could respond by stating that they support, do not support, or have no opinion on the topic (resulting in a 3x3 table). In the future, we will calculate the appropriate sample size that allows us to estimate a population proportion within a given margin of error, a calculation that has long been used in political and opinion polling.