Count data are widely collected and analyzed across natural resources disciplines, particularly in wildlife biology and conservation. Count data represent values from non-negative integers, e.g., 0, 1, 2, 3, etc. Values are obtained from counts rather than ranks such as in ordinal regression. Examples include the number of hazardous waste violations issued by an agency to a company, the counts of birds by ornithologists, and the number of butterfly species observed by a prairie researcher.

Models of count data require special consideration compared to other regression techniques presented in this book. Natural resources professionals also collect data on variables that exhibit zero-inflation (ZI), defined as an excess proportion of zeros relative to what would be expected under a given distribution. Count distributions such as the Poisson and negative binomial are useful in describing the stochastic nature of many variables. To quantify both structural and stochastic sources of variability, ZI count models are commonly employed.

13.2 Count data and their distributions

\[f_{NB}(x)={x+r-1\choose{r-1}}p^r(1-p)^x\] where \(p\) indicates the probability of success. Compared to the normal, these count distributions have a different appearance for the same set of parameters: 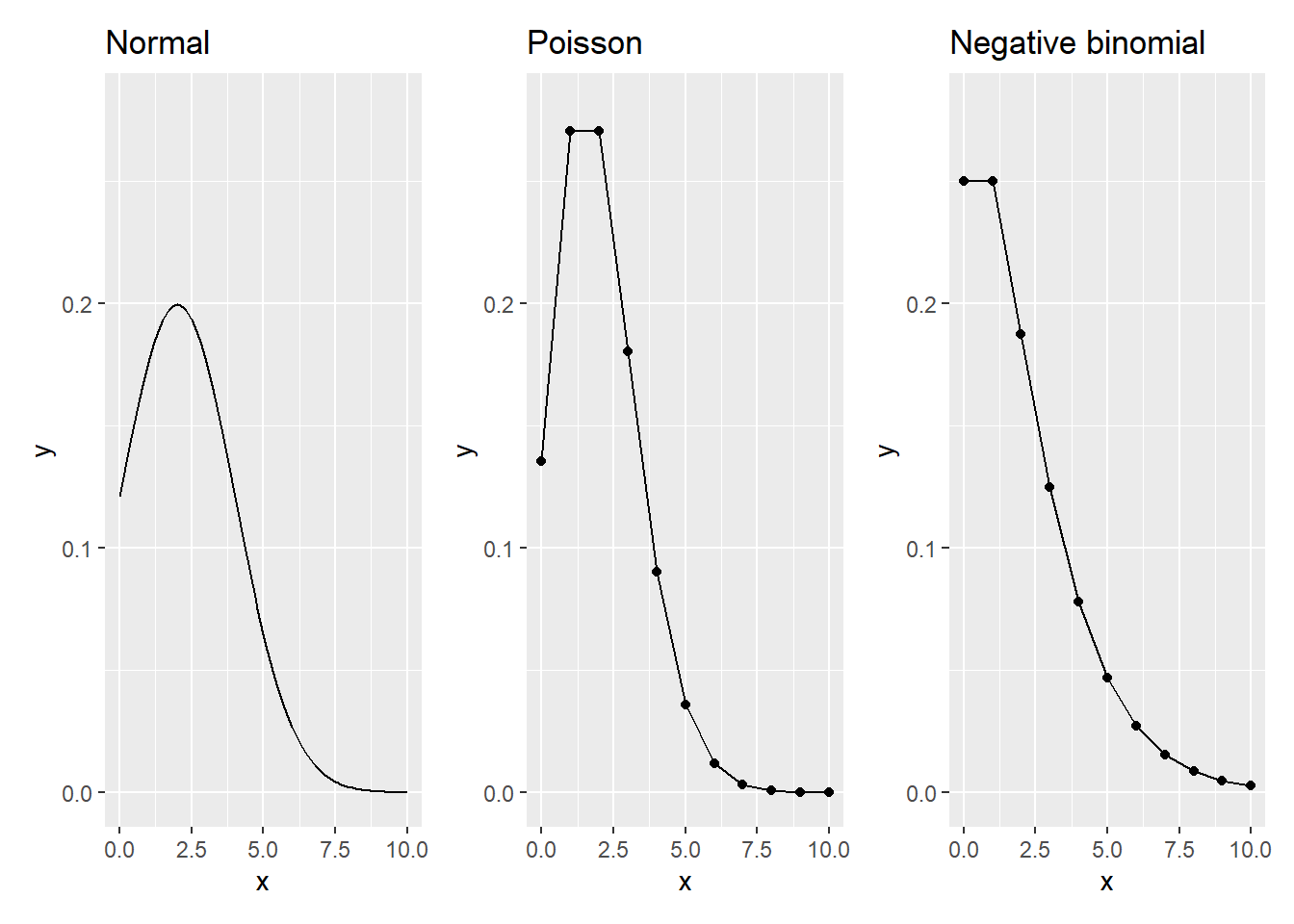 The fishing data set in the stats4nr package contains data on the number of fish caught by visitors to a state park. It includes the following variables:

There are 250 observations in the data:

Histograms work well for plotting count data such as the number of fish caught. We can see that most campers catch zero or only a few fish and only a few groups catch many fish, e.g., greater than 20: 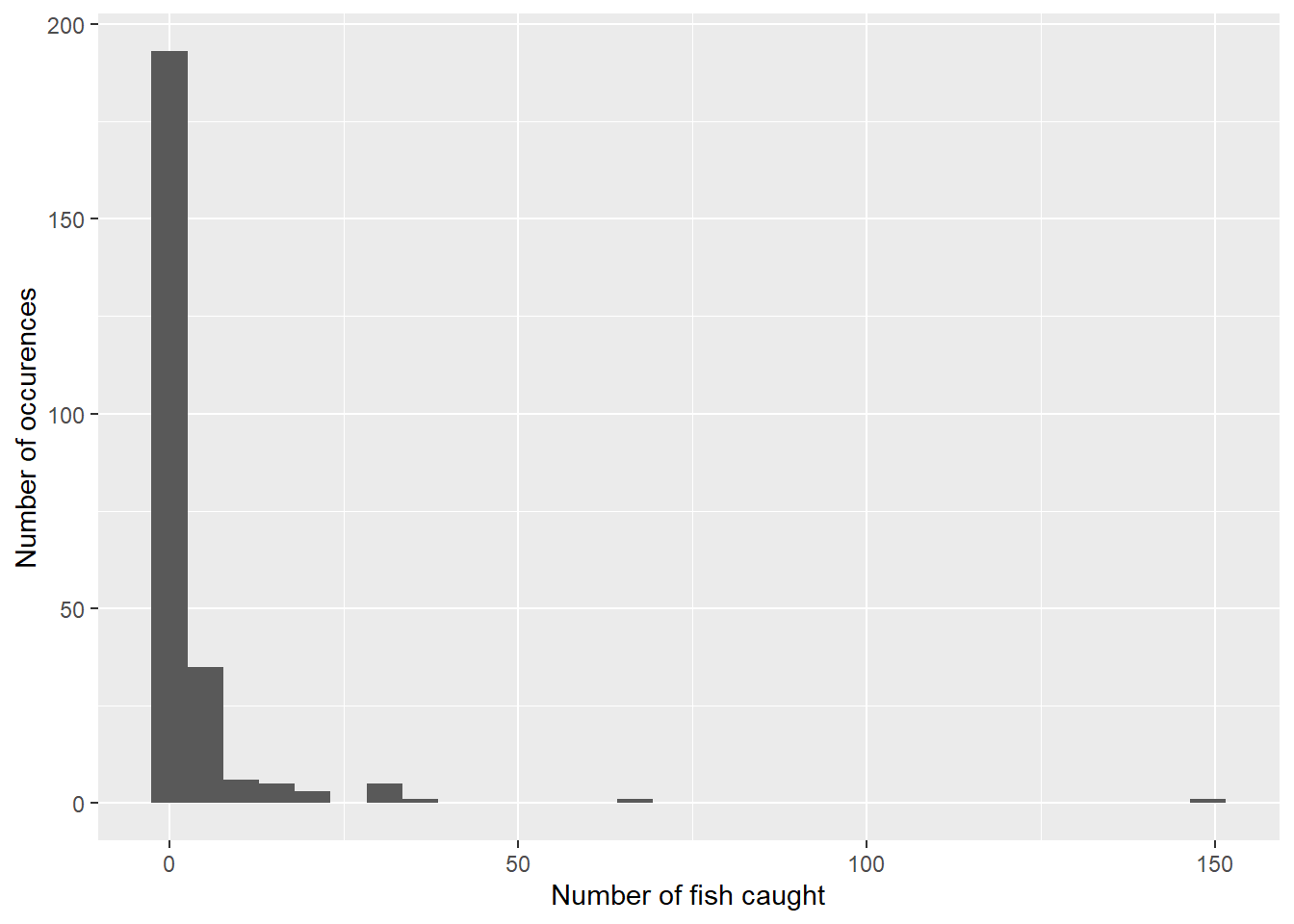 It is useful to quantify the mean and variance of the response variable to understand if dispersion is present:

We are interested in predicting the number of fish caught using three predictor variables: the number of total people in the group, the number of children in the group, and whether or not the group used a camper during their visit. One might hypothesize that more people will increase the chances of fishing success, but more children, who are likely inexperienced and may not fish for long periods of time, may decrease the chances of fishing success. Similarly, groups that bring a camper for their visit may plan to camp for a longer duration, equating to more fishing time.

In R, the glm() function can be used to fit Poisson regression models to count data. The family = "poisson" statement within the function specifies a log link function in the model:

The scale and magnitude of the coefficients confirm our hypotheses about the predictor variables and their relationship with fishing success. In addition to the output from the coefficients, also of note is the AIC value, a useful metric that can be compared to models fit with other distributions.

For fitting negative binomial regressions in R, the glm.nb() function available in the MASS package (Venables and Ripley 2002) is flexible. We can fit a similar model form as the Poisson, but instead relying on the dispersion parameter inherent to the negative binomial distribution:

Note that the scale and magnitude of the coefficients between the Poisson and NB models are similar, but with slightly different values. The dispersion parameter Theta is 0.4635 with a standard error of 0.0712. 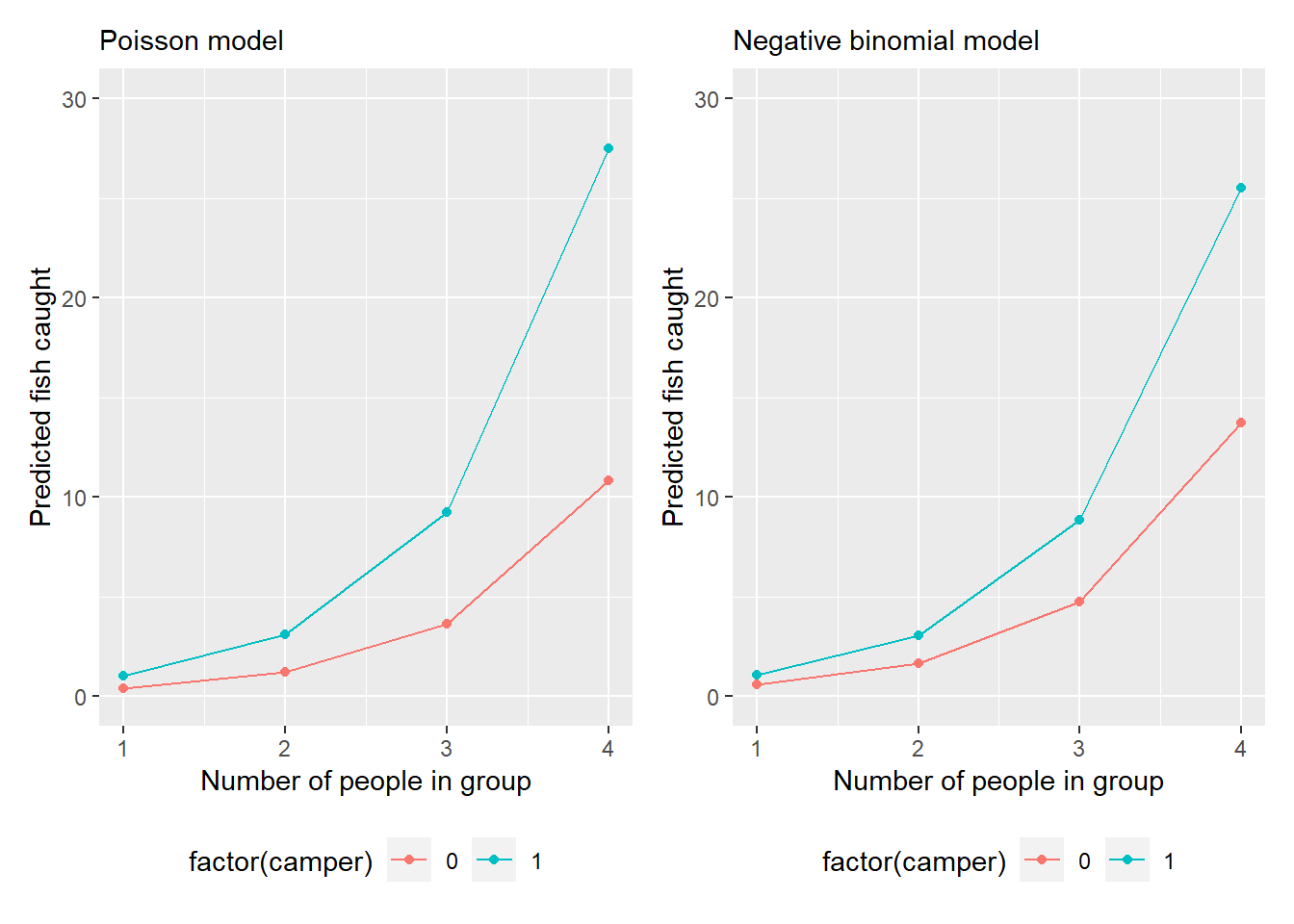 FIGURE 13.2: Model predictions of number of fish caught from the fishing data set.)

13.1 You hypothesize that as forests become older, their canopies become dominated by only a few species, which limits light availability for other species growing in the understory. Data to examine this hypothesis were acquired from the Hubachek Wilderness Research Center, an experimental forest located in northern Minnesota (Gill et al. 2019). Data were collected from 36 forest inventory plots with at least one tree larger than 12.7 cm in diameter. The number of species (num_spp), number of standing dead trees (num_dead), and average height of the trees in the plot (ht_m; meters) are the variables of interest.

13.2 Use the Poisson regression model you created in question 13.1 to make a prediction of the number of species for five additional forest inventory plots with mean heights of 12, 13, 19, 21, and 24 meters.

13.3 Make a graph using ggplot() that fits the Poisson model you created in question 13.1. For a range of tree heights from 5 to 30 meters along the x-axis, plot the predictions of the number of species for the model on the y-axis.

To account for data with a high proportion of zeros, zero-modified count models, or zero-inflated models are often applied. For example, you may visit a forest to count the number of warblers you observe, but on repeated visits you observe none. Zero inflation is also apparent in the fishing data set, as the histogram indicates that zero is the most common value (i.e., the mode) for number of fish caught. These data result in excess zeros which make modeling with standard regression techniques a challenge.

If the number of different response variable counts are relatively small (i.e., less than 30), summarizing the percent of observation by each count response can be done with the summarize() function. For the fishing data set, we calculate that 56.8% of the fishing groups caught zero fish:

Zero-inflated models estimate two equations: a count model and a model describing the excess zeros. From these kinds of models, zero-inflated Poisson (ZIP) and zero-inflated negative binomial (ZINB) models are two types of models that estimate structural and stochastic zeros (Welsh et al. 1996; Gray 2005). In the ZIP model, zero counts are estimated by those derived from a binomial or Poisson distribution. Thus, the ZIP model has two parts: a Poisson count model and a logit model for predicting the excess zeros. A ZIP probability is estimated by:

where \(\pi\) is the probability of zero occurrence, \(\lambda\) is estimated using independent variables, and \(f_{P}(y)\) is the Poisson distribution.

Similar to the NB distribution, a ZINB distribution includes a dispersion parameter \(\alpha\). A ZINB probability is estimated by the mass function:

where \(\alpha\) is the dispersion parameter and \(f_{NB}(y)\) is the negative binomial distribution.

Rather than modeling the excess zeros directly, some modelers will transform the data instead. After transforming a variable of interest, you could run a general linear model, however, the response variable will change. This will not necessarily improve linearity or assist the model meeting the assumption of homogeneity of variance. Furthermore, transformation of data with excess zeros cannot be accomplished with popular methods such as the logarithmic or reciprocal transformation.

The pscl package, abbreviated for the Political Science Computational Laboratory at Stanford University, fits a suite of models used in political science applications, including count models. The package is widely used to fit zero-inflated models. We can install and load the package to use it:

A ZINB model can be fit by setting the distribution to "negbin" in the zeroinfl() function:

Note the similarity and differences between the ZIP and ZINB coefficients in the R output. The primary addition to the ZINB output is the dispersion parameter Theta = 0.5527. When implementing the zero-inflation model coefficients to make predictions on new data, a threshold or cutpoint probability needs to be specified to determine if a zero or non-zero prediction results. For this a standard 0.50 or 0.75 probability is often specified.

13.4 The choice of which count regression model to implement depends in part on the characteristics of the response variable. Write R code and describe whether the following variables represent overdispersion, underdispersion, or equal dispersion. Also comment on which modeling technique may be appropriate for the data (e.g., Poisson, negative binomial, zero-inflated Poisson, or zero-inflated negative binomial).

13.5 Compare the Akaike’s information criterion (AIC) for the zero-inflated Poisson and zero-inflated negative binomial models fit to the fishing data set. Which model is of better quality and why do you suspect the degrees of freedom differ between the two models? 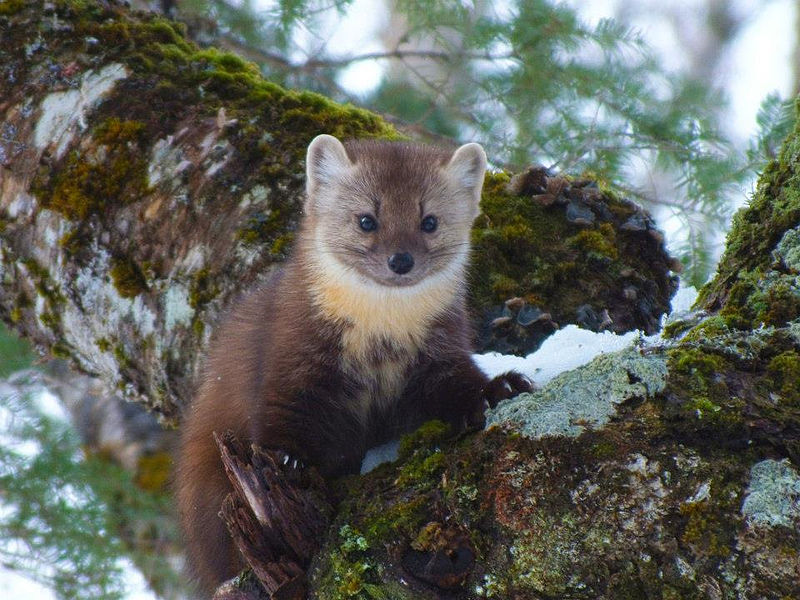 13.6 A large number of standing dead trees in a forest is an indicator of quality habitat to sustain populations of American marten (Martes americana), a mammal species found in northern temperate and boreal forests. Using the data set provided from the experimental forest in question 13.1, answer the following questions.

While AIC is a useful metric to compare multiple count regression models (e.g., the Poisson, NB, ZIP, and NINB models), a number of other useful measures can determine the uncertainty and goodness of fit for count models. Diagnostic plots that display differences between predicted and observed counts are often employed to examine model fit of count regression models. Diagnostic plots can visualize the deviance residuals, showing trends in overestimations or underestimations across a range of values. Similarly, Pearson’s residuals rely on the chi-square (\(\chi^2\)) distribution and can be used to assess model fit. As an example, we can visualize the residual values from our model fit with a Poisson distribution and store them in the fishing data set. We first predict the number of fish and then determine the deviance and Pearson’s residuals by changing the type = statement within the resid() function:

Then, we can plot the two residual values to determine trends and assess model fit: 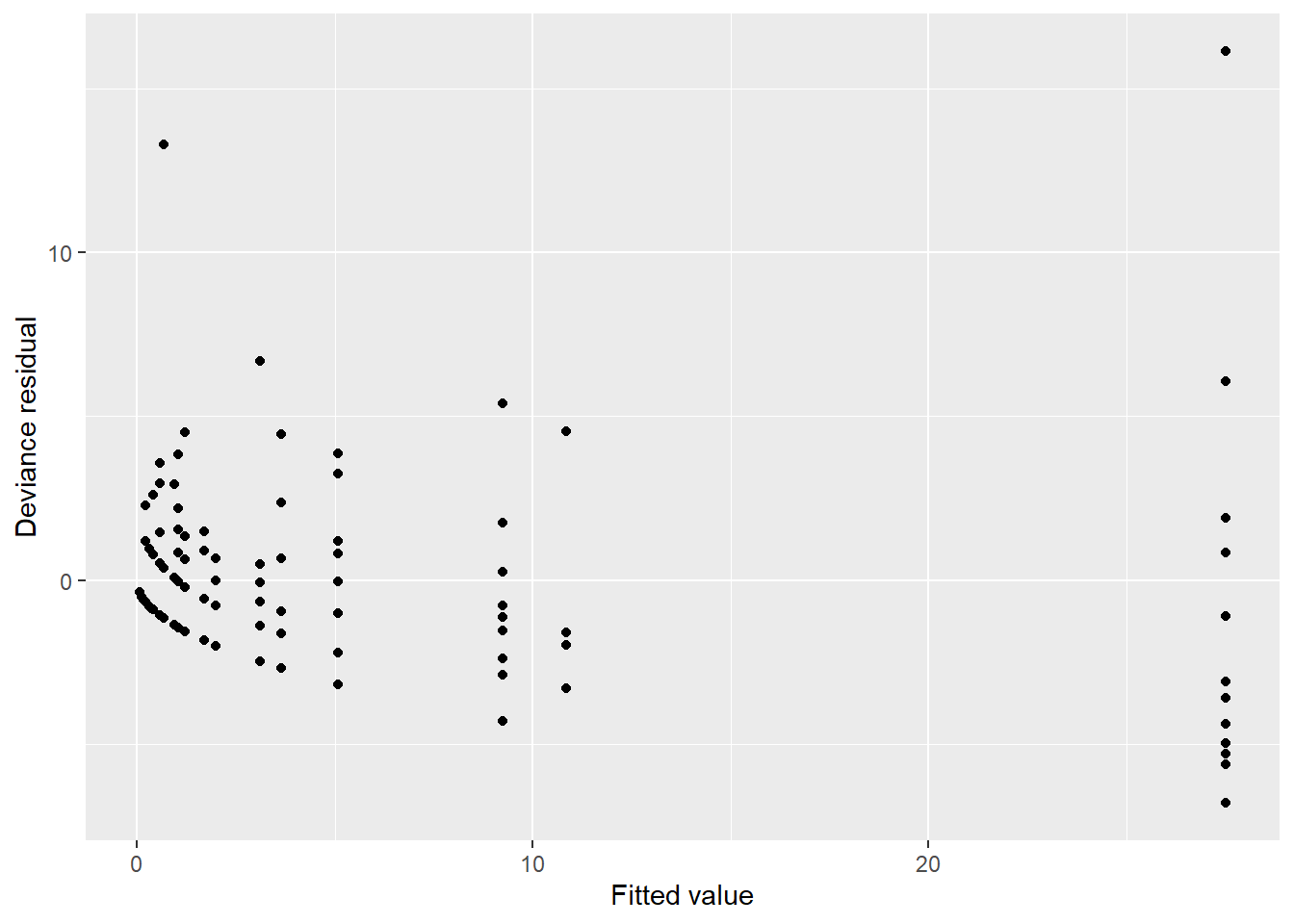 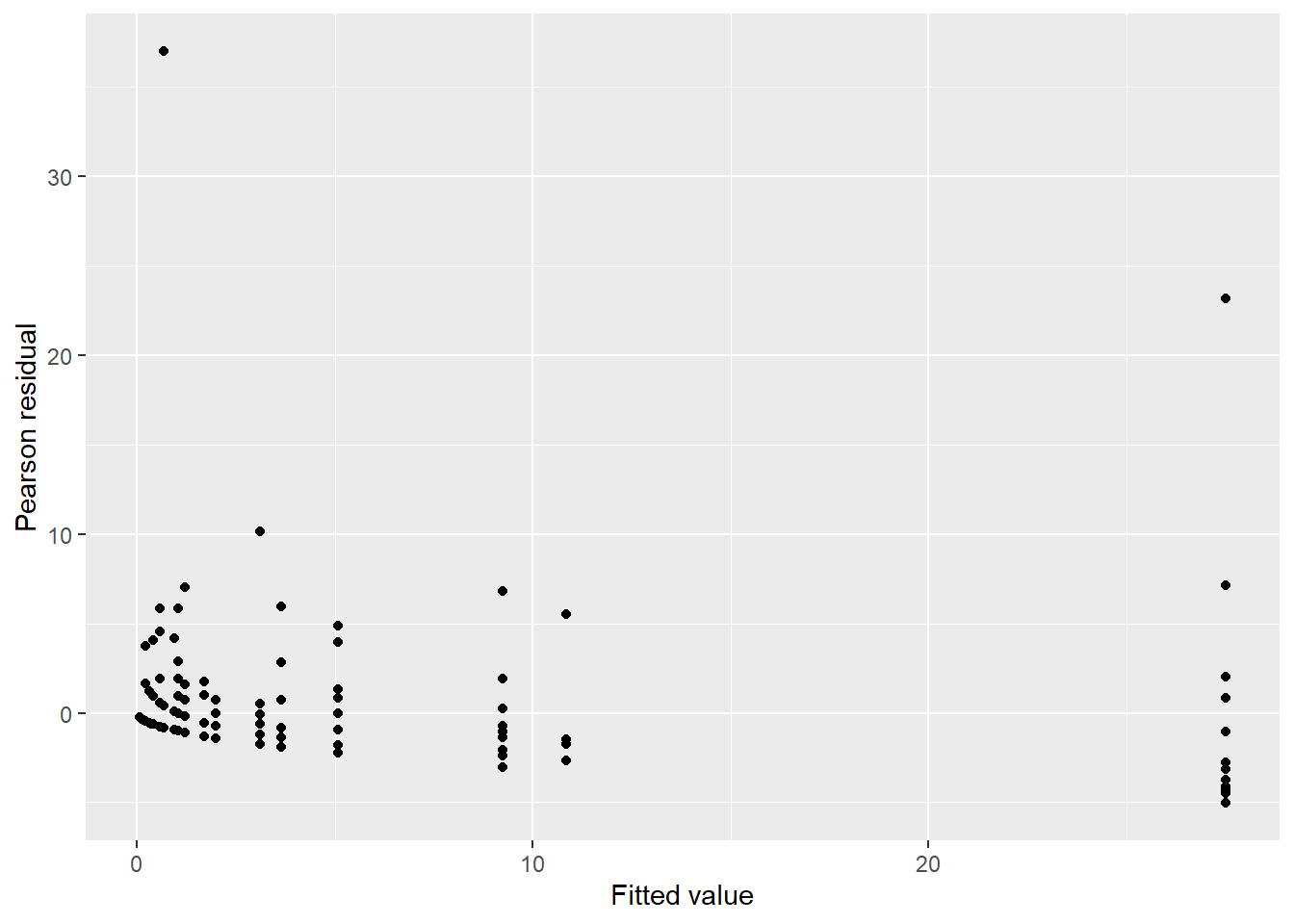 There is some concern with a single data point with a small estimated mean with a large residual (e.g., Pearson residual greater than 30 fish caught). The characteristics of this data point are worth looking into with more detail.

The root mean square error (RMSE) and mean bias (MB) are two metrics that allow you to determine the uncertainty of model predictions:

13.7 Create a diagnostic plot using ggplot() that shows the Pearson residuals for the zero-inflated Poisson model that predicts the number of fish caught from the fishing data set.

13.8 Write two functions in R that can be applied to any data set with observations and model predictions. One function should calculate the root mean square error (RMSE) and the other the mean bias (MB). Use the functions to determine the RMSE and MB for the standard Poisson and zero-inflated Poisson models that predict the number of fish caught from the fishing data set.

Count data, where observations represent non-negative integers, are widely found across natural resources disciplines. The Poisson distribution is the classic count distribution that can describe many distributions of count data. While it assumes that a mean value is equal to its variance, if this assumption cannot hold, consider if the data are distributed as a negative binomial distribution. When modeling data with a negative binomial, a dispersion parameter is specified to account for differences in values for the mean and variance. If a number of excess zeros are present in the data, consider the zero-inflated implementations of these models. Zero-inflated models estimate two equations: one that reflects the count model (analogous to the standard Poisson or negative binomial models) and another that estimates a logistic model for predicting the excess zeros.

Count models are generalized linear models and can be fit in R using code and syntax similar to logistic regression. The glm() function can fit standard Poisson models while the glm.nb() function from the MASS package fits negative binomial models. The pscl package is popular for fitting zero-inflated versions of these models and provides parsimonious output for interpreting and assessing models. It is a good practice to fit different versions of count models, including standard and zero-inflated ones, and compare their performance with metrics such as AIC and root mean square error and visualizations such as diagnostic plots. Having a thorough understanding of these regression modeling techniques will aid you when you encounter count data.